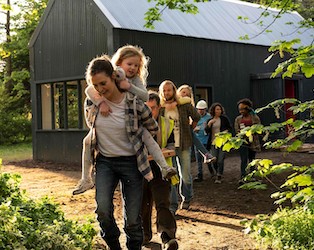 This week’s new releases at the Irish Film Institute on Friday September 10th 2021 are Herself, Copilot, Sweet Thing, and a re-release of The Servant.

“There’s a strong basis of originality here, and the warmth and good nature of the movie carries it along.”
4/5 – The Guardian

“The sudden acknowledgement that a person you once loved doesn’t exist anymore can knock the wind out of you, and Dunne captures that breathless free fall beautifully.”
TIME Magazine

“This is a feminist movie with a Sisyphean dimension that’s disquietingly universal.”
New York Times

“Co-written and directed with sensitivity and visual flair by Anne Zohra Berrached, Copilot puts an intimate spin on the devastating events of 9/11.”
4/5 – Empire Magazine

“This small, delicate, late-blooming film is quite lovely, and a throwback to the 1990s/2000s craze for semi-improvised, rough and ready indie film-making.”
4/5 – The Guardian

“What makes this simple story special is the style that the writer and director Alexandre Rockwell brings to the screen.”
New York Times

“It is a brilliant, subversive account of class relations and the changing times.”
5/5 – The Guardian

“The drama is masterfully done and exquisitely played.”
4/5 – The Times (UK)

“Glaciers might be melting, the polar caps might be crumbling, but not even the passage of half a century has taken the frozen edge off this brilliantly icy film.”
Los Angeles Times