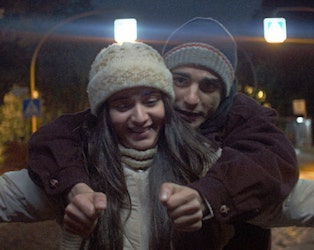 Copilot is a fictionalised account of the relationship between one of the 9/11 terrorists and his wife. Set in Germany over the course of five years, this forensically researched, imaginative, and dramatically satisfying film is clearly based on the United 93 pilot, Lebanon-born Ziad Jarrah, renamed here as Saeed and played by Roger Azar, and his Turkish girlfriend Aysel Sengun, now called Asli (Canan Kir). Students Asli and Saeed meet in the mid-90s, fall in love, and marry against her mother’s wishes. Caught between asserting herself, confirming to her parents’ traditional values, and her self-sacrificing love, Asli tries to find her own way in life. But at the twenty-first century dawns, Saeed makes a decision that will not only shatter Asli’s dreams but shake the entire world.