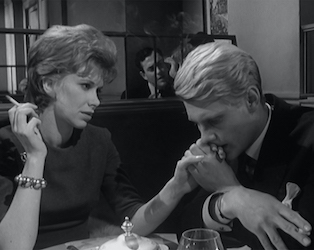 American director Joseph Losey’s career started in earnest when he began working in Europe after being named as a Communist before the House Un-American Activities Committee. The Servant marked not only the first of a number of fruitful collaborations with Harold Pinter and Dirk Bogarde, but also a significant development for each of the three in their respective careers. Upper class Tony (James Fox) takes on working class Barrett (Bogarde) as his manservant. The indispensable Barrett arouses suspicion in Tony’s girlfriend Susan (Wendy Craig) and persuades Tony to also employ ‘sister’ Vera (Sarah Miles), who is in reality Barrett’s partner, as household staff. Tony finds himself ill-suited to Barrett’s form of psychological warfare in this chilly disquisition on class structure and repressed sexuality whose DNA can be found in films such as Bong Joon-ho’s Parasite (2019).