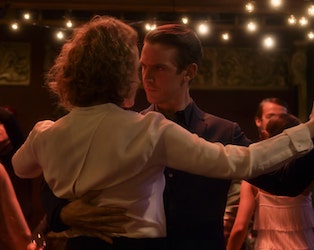 This week’s new releases at the Irish Film Institute on Friday August 13th 2021 are CODA, I’m Your Man, New Order and Wildland.

“[The] improbably charismatic 18-year-old [Emilia Jones] drags you over the bumps with a nuanced turn that veers from vulnerable to defeated to furiously determined.”
4/5 – The Times

“CODA is a radiant, deeply satisfying heartwarmer that more than embraces formula; it locates the pleasure and pureness in it, reminding us of the comforting, even cathartic, gratifications of a feel-good story well told.”
The Hollywood Reporter

“In its straightforward way, the film delivers an emotional knockout. It’s a movie about a family, and by the end you may feel you know them as well as you know your own.”
Variety

“Witty and charming, yet anchored in the reality that loneliness and longing are a vital part of the human experience.”
4/5 – Radio Times

“I’m Your Man takes a thoughtful, charming and amusingly left-field look at love, with affecting work from Eggert and a glassy-eyed, almost wryly smiling Stevens absolutely spot on.”
4/5 – The List

“New Order very effectively persuades you that a real-life revolution might well be every bit as ugly, horrifying and un-Hollywood as this shows – and that it is on the way.”
4/5 – The Guardian

“Audiences might conceivably be divided on the vicious gut punch of Franco’s approach, but as a call for more equitable distribution of wealth and power, it’s terrifyingly riveting.”
The Hollywood Reporter

“An insidiously horrible and thrilling Scandi noir.”
4/5 – The Guardian

“It sounds like a Danish remake of ‘Animal Kingdom,’ but Jeanette Nordahl’s blood-ties crime drama has its own assets, a riveting Sidse Babett Knudsen among them.”
Variety