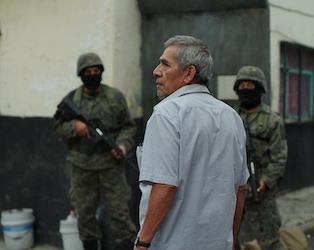 When the lavish upper-class wedding of two affluent citizens is suddenly interrupted by violent rioters who besiege their house, it soon becomes apparent that this seemingly random attack is part of nationwide working class uprising in Mexico. As seen through the eyes of the sympathetic young bride Marianne (Naian Gonzalez Norvind) and the servants who work for, and against, her wealthy family, New Order breathlessly traces the collapse of one political system as a more brutal replacement arises. Award-winning filmmaker Michel Franco’s latest is a terrifying commentary on the haves and have-nots in contemporary Mexico. A shocking and provocative depiction of class warfare, New Order, a deserving winner of the 2020 Venice Film Festival Grand Jury Prize, blends political allegory with a dystopian vision that is subversive and disturbing in equal measure.