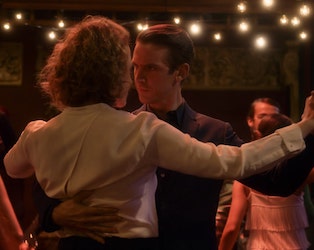 Alma (Maren Eggert) is an archaeologist at the renowned Pergamon Museum in Berlin. To secure much needed research funds for her work, she is persuaded, reluctantly, to participate in an extraordinary study. For three weeks, she must cohabit with a humanoid robot whose artificial intelligence has been programmed to align with her character and needs – he is a perfectly engineered life partner for her. She is introduced to Tom (Dan Stevens), her handsome, genial, and unflappably upbeat android companion, who proves to be relentless in his pursuit of perfectly contrived romantic cliches for his would-be partner. ‘Ninety-three percent of German women dream of this’, he assures her, as he carefully arranges rose petals around a bubble-filled tub. Tom is programmed to satisfy Alma, but he’s still in beta, and his learning curve is one of the many delights in this poignant comedy about love.