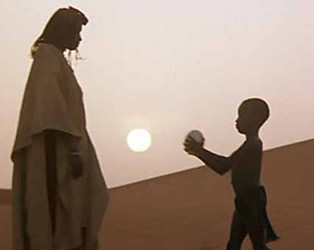 The IFI is delighted to present a season curated by critic and filmmaker Mark Cousins, a vocal champion of non-Western cinema. Mark has a hugely impressive catalogue of work in both fields, recently and most notably with The Story of Film: An Odyssey. We hope to screen this, with Mark in attendance, in the coming months.

African cinema isn’t an also ran in film history, a marginal thing, something to be patronised or accommodated. It’s splendidly central to the movies: luminous, inventive, revealing and unpredictable; there was a movie studio in Egypt from the 1930s. Despite Hollywood’s Tarzan fantasies about the continent, real black African films came to the fore in the ‘50s. The first were about the decolonising moment, and were made by path-finding auteurs like Senegal’s Ousmane Sembène, a former novelist who trained in Moscow. The ‘70s were a golden age of genres and styles, led by master filmmaker Djibril Diop Mambéty, a punky, drunky Orson Welles. In the ‘80s, African cinema went mythic. Filmmakers like Souleymane Cissé and Gaston Kaboré turned the clock back to the days before the white man and Islamo-Christianity. Cissé’s work encompassed sci-fi and sexuality, Kaboré charted the life of a foundling boy in a distant village. In the ‘90s, funding stalled, but video brought new ways of making and showing African films.

The story of African cinema is too vast to cover in one season, so we focus on one vivid chapter of it, West Africa: a place where low literacy levels gave movies extra relevance in society and where, as you’ll see, movie styles and storytelling were stretched by imaginative directors into splendid, world class guises.

Introduction and notes on individual films by Mark Cousins. Our thanks to the French Embassy in Ireland and Institut Français for their contribution to this season of films.