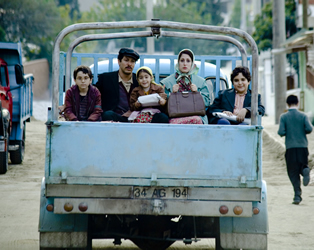 This small selection of recent German films, presented in association with the Goethe-Institut Irland, opens and closes with new works by two of contemporary cinema’s finest directors, Volker Schlöndorff and Andreas Dresen.

Schlöndorff was one of the leading lights of the so-called New German Cinema of the 1960s and ’70s, with his classic political thriller The Lost Honour of Katharina Blum bringing the movement its first international success. Educated in Paris, and a lifelong Francophile, Schlöndorff served his apprenticeship as assistant to such French cinema giants as Louis Malle, Jean-Pierre Melville and Alain Resnais. It was during this period that he first learned about the dark episode from WW2 Occupied France that inspired his new film, Calm at Sea. Appearing with the film at this year’s Berlin Film Festival, Schlöndorff (a diminutive yet sprightly figure at 73) enthralled a capacity crowd in the vast Friedrichstadt Palast with a speech that was as intelligent and moving as his film.

Less well known in this country but a key figure in German cinema for over a decade, Andreas Dresen has made a whole series of enormously courageous films that explore real-life issues with unflinching candour. Described as “a story about death that celebrates life,” Dresen’s latest, Stopped on Track, provides a compelling account of how family members cope when a husband and father is struck by a terminal illness.

The other films in the season are by emerging talents who are all worthy of attention, with the highlights including Christian Schwochow’s Cracks in the Shell and Maggie Peren’s Colour of the Ocean.

Introduction and notes on individual films by Peter Walsh.

Presented in co-operation with the Goethe-Institut Irland.