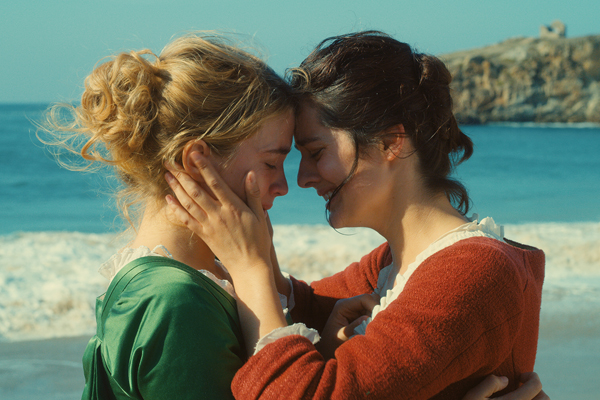 Valentine’s Day is already fast approaching, and we’ve got special treats in store for movie fans.

On Friday February 14th 2020, we’re presenting screenings of two highly acclaimed films as special previews which you can see before anyone else. End of the Century screens at 18.30, followed by Portrait of a Lady on Fire at 20.20.

END OF THE CENTURY
On vacation in Barcelona, Ocho (Juan Barberini), an Argentinian poet from New York crosses paths with Javi (Ramon Pujol), a director of children’s television from Berlin. The attraction is immediate and the two strangers engage in a passionate holiday fling. Ocho has recently split from his partner of twenty years, and doesn’t want kids. Javi has a daughter with his husband, with whom he is in an open relationship. Relaxing with drinks following a day of sightseeing, Javi confirms Ocho’s nagging suspicion that they have actually met once before, and the ensuing series of flashbacks beautifully expands upon everything we thought we knew about the two men. Lucio Castro’s delicate, deceptively simple debut feature considers the lifelong resonance of an erotically charged yet fleeting encounter and the selective nature, and ultimate fallibility of memory.

PORTRAIT OF A LADY ON FIRE
Grieving for the death of her sister, Héloise (Adèle Haenel) has returned from a convent to her home in Brittany; her mother (Valerie Golino), a widowed Italian noblewoman, has engaged Marianne (Noémie Merlant), an artist, to surreptitiously paint Héloise’s portrait while acting on the pretense that she is to be a companion to the bereaved young woman. Previous painters have failed in the commission as Héloise has refused to pose, aware the picture will be sent to the Milanese man to whom she has been betrothed by her mother, without introduction, and consequently Marianne must capture her likeness covertly. The two women gradually connect, and a subtle seduction of stolen glances, touches and conversation gives way to burning desire. Céline Sciamma’s delicate, beautifully acted fourth feature explores what it means to see, and to truly be seen.

End of the Century opens on Friday February 21st, get tickets for the preview here.

Portrait of a Lady on Fire opens on Friday February 28th, get tickets for the preview here.