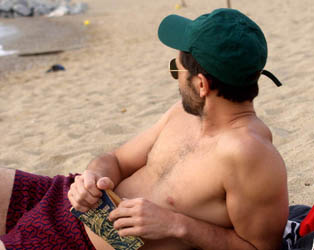 This is a special preview screening for Valentine’s Day 2020, with Portrait of a Lady on Fire also screening on Feb 14th at 20.20. End of the Century opens at the IFI on Friday, February 21st.

On vacation in Barcelona, Ocho (Juan Barberini), an Argentinian poet from New York crosses paths with Javi (Ramon Pujol), a director of children’s television from Berlin. The attraction is immediate and the two strangers engage in a passionate holiday fling. Ocho has recently split from his partner of twenty years, and doesn’t want kids. Javi has a daughter with his husband, with whom he is in an open relationship. Relaxing with drinks following a day of sightseeing, Javi confirms Ocho’s nagging suspicion that they have actually met once before, and the ensuing series of flashbacks beautifully expands upon everything we thought we knew about the two men. Lucio Castro’s delicate, deceptively simple debut feature considers the lifelong resonance of an erotically charged yet fleeting encounter and the selective nature, and ultimate fallibility of memory.