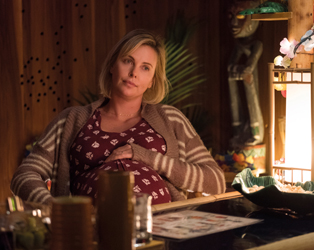 This film was released 4th May 2018, and is no longer screening.

Join us for a discussion about the film after the 18.15 screening on Wednesday May 9th.

Charlize Theron stars as Marlo, a woman overwhelmed by the arrival of an unplanned third child. Receiving little in the way of actual help from her well-meaning though ineffectual husband (Ron Livingston), Marlo begrudgingly accepts her brother’s offer of a night nanny, Tully (Mackenzie Davis), to ease the pressure.

Writer Diablo Cody and director Jason Reitman present an acerbic and unsentimental look at the difficulties of motherhood and the ease with which a woman’s own past and identity can be subsumed by family, anchored by Theron’s best performance in years.