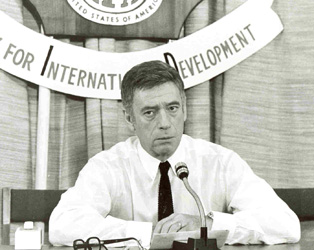 He is targeted by a militant guerrilla group and kidnapped to  bargain for the release of political prisoners; the press seize on his abduction and it becomes a media sensation, leading inevitably to violence. The film acts as a critique of US sanctions for corrupt foreign dictatorships while  questioning the use of violence to oppose such régimes.