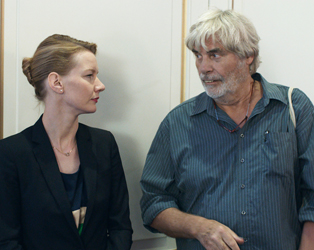 Toni Erdmann has just arrived at the IFI and we can’t wait for audiences to discover this German gem.

Director Maren Ade (Everyone Else) returns with her third feature film which has been in the works for several years. It’s about a businesswoman working in Bucharest and her oddball estranged father who shows up intent on reconnecting, and chooses to do so through the persona of Toni Erdmann.

Things quickly get complicated, a series of events which Ade mines for unique humour and pathos while the cast truly shines.

The reviews for Toni Erdmann are in, and they’re glowing. Read some examples below and then book for tickets – the film is screening daily at the IFI.

“This is one of those films in which the punchline is always delayed and the best jokes are often the saddest ones.”
4/5
Independent