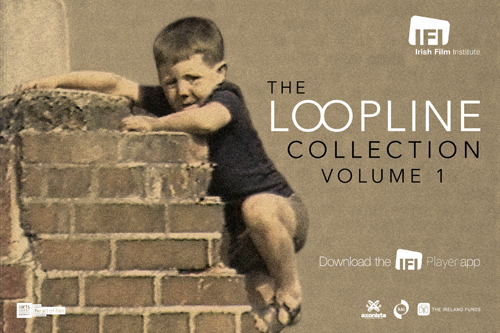 THE LOOPLINE COLLECTION VOLUME 1 RELEASED ON THE IFI PLAYER

PREVIOUSLY UNSEEN FOOTAGE OF U2 RELEASED ONLINE TO LAUNCH THE LOOPLINE COLLECTION VOL. 1 ON THE IFI PLAYER

April 16th 2019: The Irish Film Institute (IFI) is proud today to unveil the first volume of The Loopline Collection, showcasing materials from Loopline Film, one of Ireland’s most influential production companies. Founded in 1992 by filmmaker Sé Merry Doyle, this pioneering company specialised in documentary and TV series, producing a number of hugely important films including significant portraits of prominent cultural figures and work highlighting pressing social issues. Among the material is previously unreleased footage of U2 playing live on Sheriff Street in 1982.

The Loopline Collection can be viewed free of charge worldwide on the IFI’s online platform, the IFI Player and via the free IFI Player iOS app, developed by Irish tech company Axonista.

Speaking at the launch of the collection, IFI Director Ross Keane said, “Over the last 20 years, Loopline Film has amassed an extensive archive that comprises master broadcast programmes along with over 900 hours of rushes, off cuts and extensive interviews made during the production process and featuring a wealth of important social and cultural footage. This is a truly fascinating and critical collection that captures a changing Ireland, and it was vital that it be listed, catalogued and then transferred to the IFI to be preserved. We are delighted to now be in a position to make Volume One of this collection available to the public through the IFI Player.”

This first volume of the collection documents fascinating moments in recent Irish social history: most timely is Liam McGrath’s Essie’s Last Stand, a look at an elderly woman’s fight to stay in her home as developers look to take over her apartment block for redevelopment. Alive Alive O: A Requiem for Dublin features original poetry from Paula Meehan, and examines a time when the livelihoods of Dublin’s iconic street traders were under threat and when drugs became a scourge of the inner city; the film, directed by Merry Doyle, includes footage shot by cinematographer Robbie Ryan, Oscar-nominated this year for his work on The Favourite. Looking On focuses on a vibrant inner city festival in 1982, spearheaded by activist Mick Rafferty and the late politician Tony Gregory, and features the early rooftop appearance by U2.

Commenting on the project, Sé Merry Doyle said, “I started off as a young man with the burning desire to make documentaries and then as age starts to creep up on you, you realise that it is has been your life. The work Loopline Film has created over the last 30 years was filmed on a multitude of formats that include film and different video and audio tape formats, while all the recent work is now part of the digital age. The problem of what to do with all this material was solved by the BAI and the Irish Film Institute, and I am so happy to know that future audiences will have the opportunity to explore our shared past and both learn from and enjoy the experience.”

Other titles to feature as part of the collection include the intimate portrait Patrick Scott: Golden Boy, produced by Andrea Pitt and Maria Doyle Kennedy of Mermaid Films as part of RTÉ Arts Lives, which gives an unparalleled insight into the work of one of Ireland’s foremost abstract painters; the film includes footage shot by Seámus McGarvey, the Oscar-nominated cinematographer of Atonement and Anna Karenina. Patrick Kavanagh: No Man’s Fool is a focus on the life of the renowned poet, with contributions from poets John Montague and Macdara Woods, writer Dermot Healy, and singer Jimmy Kelly.

The Imprint series, hosted by Theo Dorgan and first broadcast on RTÉ between 1999 and 2001, features in-depth and revealing interviews with some of the literary world’s most notable figures such as Margaret Atwood, Richard Ford, Gore Vidal, Eavan Boland and Colm Tóibín, while the six-part series The Good Age, originally broadcast in 1997, is an intriguing look at the issues facing older people, with candid personal testimonies about intimacy, self-care and ageism.

James Gandon: A Life looks at the career of the renowned 18th century architect who designed some of Dublin’s most iconic buildings including the Customs House and the Four Courts; the documentary is notable for a particularly frosty interview with former Taoiseach Charles J. Haughey at his Gandon-designed home in Abbeyville, North Dublin.

Rounding out this release are Martina Durac’s documentary Mairéad Farrell: Comhrá nár Chríochnaigh (An Unfinished Conversation) about the Republican activist who was shot by the British Army in Gibraltar in 1988, and John Henry Foley: Sculptor of the Empire, a look at the 19th century sculptor whose most famous statues include those of Daniel O’Connell on O’Connell Street and Henry Grattan on College Green.

Before its launch today, The Loopline Collection was already an award-winning project. Last December, the IFI Irish Film Archive won the prestigious international Digital Preservation Coalition Award in the Safeguarding the Digital Legacy category. Seeing off competition from the White House Historical Association Digital Library and the UK Parliamentary Archives, the project required the creation of new custom tools to appraise the 350,000 pieces of the collection. These open source tools, known as the IFIScripts, have been shared widely with the preservation community worldwide and have been adopted by a number of institutions globally including the University of California, Berkeley.

The Loopline Collection can be viewed free of charge worldwide on the IFI’s online platform, the IFI Player, and via the free IFI Player iOS app (download it here), developed by Irish tech company Axonista.

For more information, images, and access to footage, please contact Stephen Boylan at the IFI Press Office at 01-6129448 or at sboylan@irishfilm.ie. Sé Merry Doyle will take part in a public interview at the IFI on Tuesday, April 23rd at 18.30 – tickets are now on sale here.

The Loopline Collection is kindly supported by Axonista, the Broadcasting Authority of Ireland, and The Ireland Funds.

The IFI Player is delighted to partner with Irish Central as its official International Media Partner.