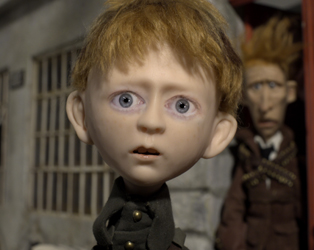 Our recent intern, Brian Culley, spent five weeks in IFI Education, on placement as part of his film studies degree course at DKIT.

Read his reviews on films from our schools programme: 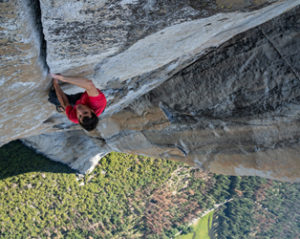 Describing the film before it began, Mountaineering Ireland’s climbing officer Damien O’ Sullivan, displayed how Alex Honnold, the subject of Free Solo, defies death miles into the sky. Holding up his thumb and forefinger Damien emphasised that most of the time, Honnold is literally inches away from death, gripping onto the side of rock faces with nothing more than a determined pinch. As a free soloist, Alex participates in perhaps the most dangerous sport in the world. Clinging to the edge may be a figure of speech for most, but for Honnold it’s also a way of life.

While most climbers tackle mountains with ropes and harnesses, Alex scales cliff faces without any precautions or safety devices. There is nothing preventing him from falling to his death. Nothing but himself. But why does this man find life most perfect and liveable, whilst doing something that could mean the end of everything in an instant? By following Alex during both his most astounding and human moments, the film manages to thrill
and inspire. Terrific camerawork immerses you within Yosemite National Park. Both fellow climbers and friends of Alex, the film crew tirelessly cover his most daring moments as well as his most personal ones, when he’s alone in his van, contemplating what lies ahead or simply talking with his girlfriend. Complex and peculiar, Honnolds is a person brimming with perseverance and determination, who never settles and refuses to be like anyone else. As a result, Alex Honnold acts as an inspiring figure for all ages.

Though most will probably be reluctant to challenge the 2, 307 metre El Capitan as Alex hopes to, the film no doubt succeeds in introducing students to the world of mountaineering. In fact, for those who may be inclined to discover more about the sport, there are now many climbing wall facilities based in Dublin and around the country. Organisations like Mountaineering Ireland also assist in the growth of the sport, hosting talks, establishing activities and maintaining a growing community of like minded individuals to connect, and even climb together. Their goals tie directly back to Alex’s dedication to a sport and a greater pursuit of something fulfilling.

In a broader sense, Free Solo is a film filled with as much heart as it is suspense. Thrilling and touching, it provides a view of another world, and paints a beautiful portrait of a fascinating, likeable and unusual person. In Alex, students may find a role model, but they might also find a part of themselves. Perhaps that’s what makes Free Solo so important, lasting and affecting. It may be a film about specific person, but it’s a film that doesn’t fail to connect with everyone else.

Set in a Francophone region of Canada, A Colony follows Mylia, a fifteen year old girl who’s a bit lost and adrift in life. She’s detached from the world around her, distant from both her family and school lives. She’s without friends and without purpose, and her story is about finding both. In trying to discover who she is and who she wants to be, Mylia finds herself in new places and situations, experiencing many things she hasn’t before. A boy in her class begins to appear in her life more often, uncertain friendships seem to bloom, and Mylia must personally wrestle between the conflict of fitting in and being herself.

Subtle and restrained, A Colony never fails to be beautiful despite its subdued setting. Genevieve Dulude-de Celles’s direction and Lena Mill-Reuillard & Etienne Roussy’s cinematography builds as much depth and atmosphere as it does character and emotion. Camerawork is often handheld and roaming, capturing the innate qualities of the overcast Quebec weather alongside the downcast mood of Mylia. Often there is little need for dialogue. A look on Mylia’s face, played terrifically by Emilie Bierre is all we need to understand her inner turmoil. It is clear that this care, attention to detail and passionate creativity is deserving of the accolades the film has received, having won the Crystal Bear in Generation at the Berlin International Film Festival and received seven nominations at the 7th Canadian Screen Awards.

Through the depiction of her reluctant, cautious search for more, the film touches on a variety of other topics; peer-pressure, identity, family, culture and the importance of realising oneself. Parts of Mylia seem to long for, hope for and search for fulfilment while other parts flinch from
connection. Like any teenager, like any person, she is conflicted. These themes and the general setting allow the film to be both accessible and linguistically immersive. Ultimately, these qualities make A Colony a terrifically engaging experience, and even an educational one too. More than anything the film is occupied not just with the idea of fitting in, but in questioning if we need to. Our issues, backgrounds and unique qualities are often what make us feel miserable and isolated. Yet when embraced by ourselves, as well as encouraged by others, they tend to be the very things that make us feel special and whole.

On the 28th of February I attended the IFI Careers Day in IFI as part of my TY work experience. This was a day where students aged 15-18 had the opportunity to hear experienced filmmakers talk about their jobs in the film industry. Each of the filmmakers discussed how they got their start in the business and what films they had worked on through the years. The event was advertised through the IFI’s School Programme. The day began with an introduction from director Lenny Abrahamson which was followed by a talk from cinematographer Cathal Watters whose films include Viva, Handsome Devil and Rosie.

After this I stayed in Screen 1 and heard from extra coordinators and stuntmen, Jonathan Shaw, Dennis Fitzpatrick and Charlie Endean who discussed their work on Vikings, Game of Thrones and The Wind That Shakes The Barley. Lenny Abrahamson (Room, Garage, Adam & Paul) and Ed Guiney who has produced these films as well as The Favourite, Glassland, The Guard and more then talked about how they met and their beginning in film which I really enjoyed and found very interesting.

At one o’clock there was a break for lunch and students also had the chance to meet graduates from the YIFM National Youth Film School, Kilkenny, and Fresh Film Festival, and to ask questions and see some of their work. Irish author and screenwriter Derek Landy, the writer of the popular Skulduggery Pleasant series was the next speaker who talked about the creative process and the difficulties he faced early on in his career before writing Skulduggery Pleasant.

The final speakers I saw on the day were assistant Director Hannah Quinn and Director of Photography Kate McCullough who were working on the TV show Blood. Some clips of the show were also played on the big screen.
Other guests throughout the day were Foley artist Caoimhe Doyle who has worked on The Favourite, Room and Game of Thrones, podcast host Erin McGathy (Community) who interviewed actor Cathy Belton (Red Rock, Philomena, Roy). There was also animation with Cartoon Saloon’s Jeremy Purcell. Costume Designer Consolata Boyle (The Queen, Florence Foster Jenkins, Philomena) gave a talk about her work. Screen International’s chief critic and reviews editor Fionnuala Halligan spoke about Film journalism. Gavin O’Connor from Brown Bag Films talked about Digital Painting for animation and games.

To conclude the event the students had the opportunity to meet representatives from 3rd level institutions who specialise in film and TV courses. Overall I really enjoyed the day as it was a great experience to hear from so many filmmakers and would recommend it to all students who are interested in a career in film. Mar 2019.