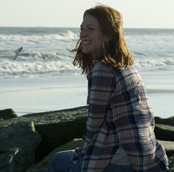 We were delighted to host a discussion with the Alzheimer Society of Ireland following a screening of Still Alice at the IFI on Saturday, March 7th. The panel was set up to explore issues raised by the film, and broaden out to look at the value of film and the arts for both awareness-raising and therapeutic purposes for people living with Alzheimers and dementia.

The panel was chaired by director and producer Anna Rodgers, and featured Tina Leonard, Head of Advocacy at The Alzheimer Society of Ireland; Hilary Moss, Director of the National Centre for Arts and Health;  Helen Rochford Brennan from Sligo, Chair of  the Irish Dementia Working Group and vice-chairperson of the European Working Group of People with Dementia; Ronan Smith, Advocate for the Irish Dementia Working Group; and Bairbre Ann Harkin, Education Curator at Butler Gallery Kilkenny. Butler Gallery is a founding member of the Azure Partnership, alongside Age & Opportunity, The Alzheimer Society of Ireland and the Irish Museum of Modern Art. Azure explores the potential for greater participation of people with dementia in cultural settings in Ireland.

Still Alice is currently showing at the IFI. BOOK HERE.

Listen to the discussion here: