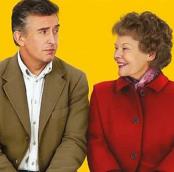 Steve Coogan at the preview of PHILOMENA at the IFI [podcast]

“That was one of the things that motivated me: to make a film that is both sincere, intelligent and funny” – Steve Coogan on his reasons for adapting Philomena Lee’s story for the big screen at the preview screening of the film at the IFI on October 18th.

Listen back to the Q&A, hosted by Michael Doherty (RTÉ Guide):

Philomena sees Steve Coogan as Martin Sixsmith – after losing his job with the Labour government, former BBC journalist finds himself at a loose end. When a dinner party waitress tells him about her mother, a retired nurse who had her child taken from her and put up for adoption by nuns in Ireland 50 years previously, he is initially dismissive of this mere ‘human interest story’. However, on meeting Philomena (Judi Dench), he is drawn into her story and the two set off in search of her son.

Showing at the IFI from November 1st. Tickets are on sale now!