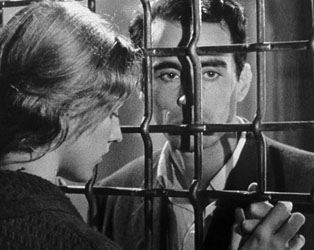 Bresson’s first original screenplay concerns Michel (Martin LaSalle), who, on realising the pleasure he derives from his initially clumsy acts of stealing, falls in with a group of more experienced petty thieves, quickly acquiring the skills necessary to provide a regular stream of income, despite his obvious abilities to source a livelihood through more legitimate means. He is encouraged by Jeanne (Marika Green), a friend’s lover, to visit his poor and ailing mother more regularly, but refuses. He is also pursued by a police inspector determined to punish him for his crimes. Michel is a character conflicted between his determination to live outside societal laws and morality and his desire to assimilate these very values and integrate into the broader community.