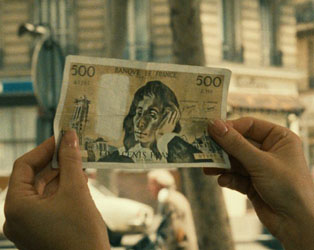 Jonathan Hourigan, Head of Screenwriting at the London Film School,  introduced  this screening  and hosted a post-screening discussion.

Bresson’s final film is perhaps his most overt tract warning of the lures of money and materialism, questioning the concepts of conscience and corruption, and innocence and guilt in a society motivated by greed. Based on Tolstoy’s novella The Forged Coupon, it follows the disastrous consequences for a group of connected individuals when a forged 500 Franc note circulates amongst them, initially as a prank. Hapless deliveryman Yvon (Christian Patey) unwittingly attempts to use it in a restaurant where the forgery is discovered, leading to his imprisonment. His determination to exact revenge sets in motion a further chain of events that leads to a downbeat and uncompromising ending that serves as a fitting close to a remarkable body of work.

Jonathan Hourigan is a graduate of Oxford University and the National Film and Television School. He was assistant to Robert Bresson on L’Argent and in addition to his own work as a writer, director, script consultant and teacher, he continues to be involved in caring for the legacy of the great French director.