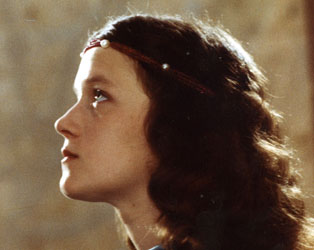 Bresson’s rendering of Arthurian legend is, despite the romantic potential of the material, a typically spare and unflinching look at the dichotomy between the individual’s best and worst behaviours. As the Knights of the Round Table return to Camelot following the failure of their quest for the Holy Grail, they are presented as bitter and disappointed rather than noble or heroic. The reunion of Queen Guinevere (Laura Duke Condominas) and her lover Sir Lancelot (Luc Simon) proves disappointing when he reveals he has sworn an oath to end their adulterous affair, believing his recent failure to be God’s punishment for his misdeeds. However, the rumours regarding the two spread by Mordred (Patrick Bernhard) ultimately lead to a more earthly form of retribution.