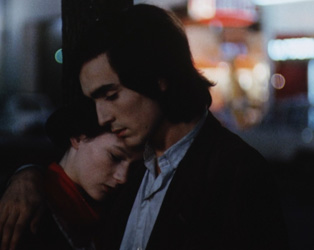 Bresson began his fifth decade of filmmaking with another loose adaptation of Dostoyevsky, this time of his short story White Nights, previously adapted for the screen by Luchino Visconti in his 1957 film of the same name. Young artist Jacques (Guillaume des Forêts) encounters Marthe (Isabelle Weingarten), who is about to jump from Paris’s Pont Neuf. It is revealed that Marthe had been driven to despair on discovering that her lover had returned to Paris and made no effort to contact her. Jacques arranges to meet her over the following nights, after which time the two profess their feelings for each other. The disparity between Jacques’s idealism and Marthe’s level-headedness is resolved in a manner typical of the director.