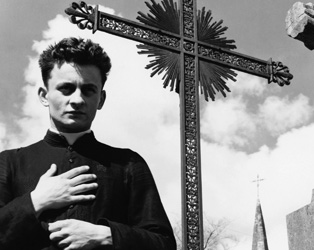 A creative turning point in the director’s career, Diary of a Country Priest sees the emergence of what is now identifiable as the Bressonian style in its use of voiceover, sound, editing, and his first ‘actor-model’, Claude Laydu. Laydu plays the titular priest, an idealistic young man on his first assignment. Rather than receiving a warm welcome from his new parishioners, he is met with suspicion and contempt, borne at least in part of an obvious commitment to his vocation and dedication to his faith that is reflected in his ascetic lifestyle. Tested at every turn, the film observes how this man’s spiritual ideals offer comfort in a cruel world that seems to provide little in the way of grace.