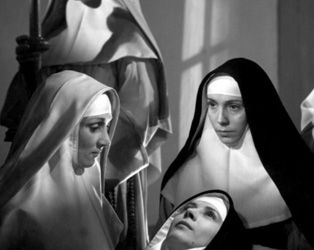 Bresson’s first experience as director came when making his only short film, the perhaps unexpectedly comedic Affaires Publiques (1934). Nine years later, he began his career proper with his first feature, Angels of Sin, which, although generally considered his most conventional film, nonetheless contains thematic concerns that would take on greater prominence throughout his later work. In a Dominican convent whose members are dedicated to helping women adjust following their release from prison, novice Anne-Marie (Renée Faure) takes under her wing Thérèse (Jany Holt), who, unbeknownst to the young nun, has murdered the man she believed responsible for her unwarranted incarceration. In its study of the complex interplay between conscience and faith, the film makes for a fascinating parable.