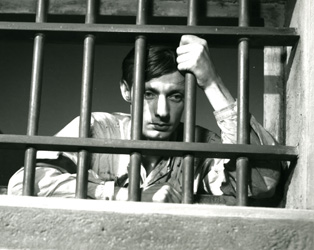 A Man Escaped is based on the memoirs of André Devigny, a member of the French Resistance who broke free from Montluc prison. As Bresson himself had been imprisoned by the Nazis for being part of the Resistance, the film can be seen as yet another example of how, despite the rigour of his filmmaking style, Bresson’s work was nevertheless deeply personal in its subject matter. A film about hope and perseverance in the face of despair, Fontaine (François Leterrier) is the man who must either accept his imprisonment and its inevitable outcome or find a way to save himself. The visual supersedes the verbal in a sparse yet intimate film, and Bresson proves a master at creating suspense from the simplest of materials.