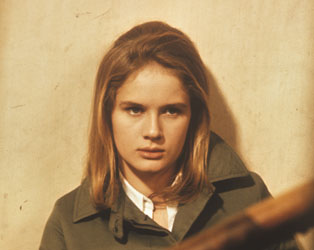 Bresson’s first film in colour, adapted from a short story by Dostoyevsky, is here presented in a new digital restoration. It begins with Elle (Dominique Sanda’s film debut, although she, like Anne Wiazemsky, would go on to an illustrious career) leaping from her apartment balcony to her death. Her husband Luc (Guy Frangin), a pawnbroker, tries to understand what motivated her to commit suicide by recounting the tale of their courtship and marriage to their maid, Anna (Jeanne Lobre). Although the perspective does not shift from that of the husband, Bresson’s camera allows us to see the details the character missed, indicating a disconnect between the couple that reflects the director’s greater concern with the detachment between the spiritual and the material.