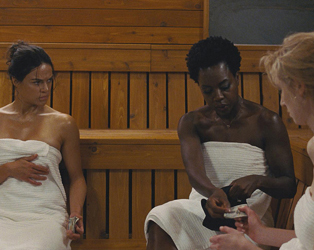 Read on for a selection of reviews of these titles, or pop in to make up your own mind.

“The cast is fab, but Davis and Debicki really shine”
4/5 – Irish Independent

“Whether you want a good yarn, a rollercoaster ride, a cinematic experience with quality acting, camera work, plot or pacing, Widows has something for everyone.”
5/5 – RTE

“Elegant and gripping, ‘Widows’ is a twisty crime thriller with style and substance to spare”
4/5 – Entertainment.ie

“The film’s style, boding nicely for future Dano projects, is as crisp and judicious as the writing”
4/5 – Telegraph

“Actor Paul Dano has made a small gem in Wildlife, his first film as a director.”
Hollywood Reporter

“Carrie Mulligan ignites a blaze in actor-turned-director Paul Dano’s moving familial melodrama about a 1960’s housewife and mother who can’t catch up with the feminist stirrings she feels inside. One word for Mulligan: Wow.”
4/5 – Rolling Stone

GOOD FAVOUR
“In common with its inscrutable protagonist, it requires you to follow deep into the woods”
4/5 – Irish Times

“A powerful and gripping film that explores the deep complexities of faith and its consequences, particularly in the face of crisis”
Film Ireland