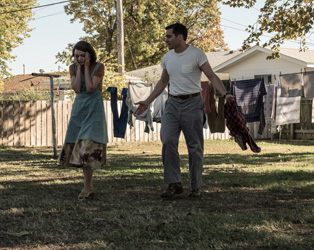 This film was released on 9th November 2018, and is no longer screening.

Paul Dano’s directorial debut, co-written by his partner and frequent on-screen collaborator Zoe Kazan, is a delicate adaptation of Richard Ford’s story of a family’s self-destruction in 1950s

Montana. Fired from his low-paying job as a golf club groundskeeper, Jerry Brinson (Jake Gyllenhaal) succumbs to his latent anger and depression and all but gives up, forcing his wife Jean (Carey Mulligan) and 14-year-old son Joe (Ed Oxenbould) into the workplace. When Jerry leaves on a whim to fight encroaching wildfires that are threatening the community, Jean, by turns liberated from his oppressive presence and humiliated by his rejection, must learn to face up to a new reality. Her growth as a character, viewed mostly from the perspective of the wise-beyond-his-years Joe, forms the backbone of Dano’s poignant, brilliantly acted examination of post-war American disillusionment.