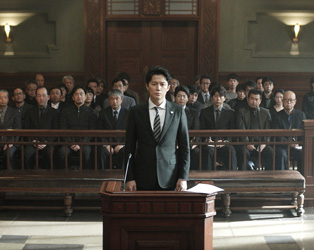 Review Roundup: The Third Murder, Dark River and I Got Life!

We have three new films releasing today Friday March 23rd, read on for a selection of reviews for The Third Murder, Dark River and I Got Life!

“Clio Barnard’s film is full of weather and brooding atmosphere, and Wilson is superb as the nervy but resourceful Alice”
Irish Independent

“There’s scarcely room here for improvement at the level of craft or performance; in particular, it’s gratifying to see leading lady Ruth Wilson headlining a big-screen vehicle worthy of her flinty brilliance”
Variety

“A moving, North of England-set portrait of marginalized working-class cultures and the resilience of damaged children”
Hollywood Reporter

THE THIRD MURDER
“The slow-burning and sometimes surreal interrogation room interviews and the director’s canny use of doubles, reflections, red-herrings, and Rashomon-effect makes for a nervy, if softly-spoken courtroom drama”
4/5 – Irish Times

“The Third Murder is a captivating puzzle”
4/5 – Guardian

“A complex and engrossing examination of truth”
Hollywood Reporter

I GOT LIFE!
“A great deal is placed on Jaoui’s shoulders, but she rises to the challenge and brings real colour to her performance”
4/5 – Irish Times

“I Got Life is a delightful little gem of a movie and Jaoui as Aurora plays a stormer, equal parts vulnerability and chutzpah. Tres charmante”
4/5 – RTE

“Generally, though, it’s frothy and fun, and held together with considerable warmth by [Agnès] Jaoui, who treads a neat line between comedy and believability”
Times UK