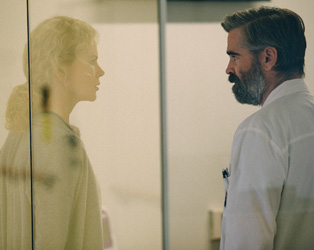 Review Roundup: The Killing of a Sacred Deer, Condemned to Remember & Sorcerer

There’s something for everyone at the IFI this week, including an acclaimed new drama, an emotional and timely documentary and the return of a long-lost classic.

The Lobster twosome Yorgos Lanthimos and Colin Farrell reteam for The Killing of a Sacred Deer, an eerie family chiller set in America and focused on the relationship between Farrell’s surgeon and a strange young man played by fellow Irishman Barry Keoghan.

Holocaust survivor Tomi Reichental goes on a personal journey to uncover his own history, and how the world is in danger of making those same mistakes again, in the compelling documentary Condemned to Remember.

And Sorcerer from director William Friedkin (The French Connection, The Exorcist) is back on the big screen. The rarely seen thriller about a group of down on their luck men, including Roy Scheider, tasked with transporting unstable dynamite through the South American jungle returns in a new 4K restoration, celebrating its 40th anniversary.

Check out some reviews of these films below, and pop into the IFI to make up your own mind!

THE KILLING OF A SACRED DEER
“Cancel awards season: Barry Keoghan has won all the filums for 2017”
4/5 – Irish Times

“Keoghan is a revelation”
5/5 – Irish Independent

“This is cinema that slinks around your subconscious like a hungry panther, sniffing out soft bits to nip”
5/5 – Telegraph

“The Killing of a Sacred Deer is Lanthimos with the gloves off, and it makes the absurd, amazing “The Lobster” seem like a warm and cuddly experience by comparison”
The Playlist

“Even the opaque hints can drive you cuckoo with frustration. Lanthimos does not coddle his audience. His M.O. is to shock, provoke and leave you talking to the voices inside your own head. The choice is yours”
Rolling Stone

“Anyone who likes their films nicely wrapped up should leave such expectations in the foyer. It’s going to get Biblical”
4/5 – RTE

SORCERER
“Perhaps the elusive, uncanny soundtrack of Tangerine Dream brings this about, or maybe it’s Friedkin’s juxtapositions of close-ups and stark long shots of the tiny trucks lost in jungle or desert landscapes, but Sorcerer eventually seems to be happening someplace not of this world. Not hell, exactly; maybe Limbo”
Boston Globe

“A defiant, mad gesture of a film that features some of the most exhilarating sequences in movie history”
The Dissolve

“By the time Sorcerer gets around to its rain-soaked, rickety-bridge set piece, you’ll either be obsessed or fully checked out. Give yourself a chance to pick sides”
Time Out

CONDEMNED TO REMEMBER
“Among the most moving films we will see this year. All involved should be proud”
4/5 – Irish Times

“Condemned to Remember is a powerful, frequently moving film”
5/5 – RTE

“He cries now and then while listening to Srebrenica survivors: he shares their pain and understands only too well the importance of remembering”
4/5 – Irish Independent

“[Reichental’s] life is one of immense moral courage. He is not remaining silent. He is a strong voice against evil. “Condemned to remember” bears witness to his generous and fearless spirit”
No More Workhorse