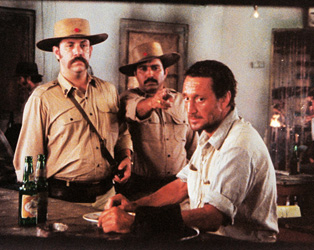 This film was released on Friday 3rd November 2017 and is no longer screening.

William Friedkin followed the phenomenal success of The Exorcist (1973) with Sorcerer, inspired by the same novel as Henri-Georges Clouzot’s The Wages Of Fear (1953). Four men whose criminal activities require them to disappear
quickly assume fake identities and hide out in a remote Latin American village.

When an oil well explodes 200 miles away, the oil company seeks four volunteers to drive the trucks transporting the highly unstable nitroglycerine that will extinguish the fire. Desperate for the paychecks that will allow them to return to civilisation, the four men step forward to undertake the nerve wracking journey.

Despite its initial commercial failure (in part due to its opening shortly after Star Wars), the film’s reputation has grown and, having long been unavailable for screening in cinemas, we’re pleased to present the film in this new digital restoration.