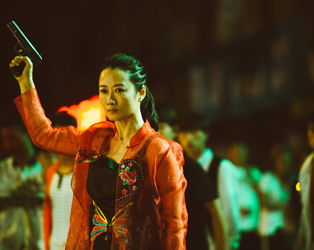 Four new films release at the Irish Film Institute from Friday the 26th of April 2019: Donbass, Styx, Ash is Purest White and The Dig.

“A grittily effective oater, narratively tight as a drum and shot in the gloom of a never-ending winter where it unturfs a twisty ending to delight genre fans.”
Screen International

“This is “All Is Lost” with a spinning moral compass and a topical dimension that proves even more gripping than its brilliantly achieved visceral action.”
Variety

“Its dizzying strength is as a visceral journey, a detour from the privileged freedom represented by a horizon to the tragic limbo of displacement, an ocean that’s both a confinement and an abyss.”
LA Times

“It is a nautical yarn about the haves and the have-nots, using the microcosm of the Asa Grey to explore social, economic and political dilemmas that are the neglected responsibility of us all.”
4/5 – Little White Lies

ASH IS PUREST WHITE
“As ever, Zhao Tao puts in the best performance you’ll see this year. See it and marvel.”
5/5 – Irish Times

“In Ash is Purest White, director Jia has switched on what are in effect noir sidelights into a Chinese underworld while credibly building a certain sympathy for the two gang leaders of the piece”
5/5 – RTÉ

“At 141 minutes, the work has its intellectually ponderous moments but is ultimately saved by Jia’s muse and wife, Zhao Tao, who surpasses herself in a role of mesmerizing complexity.”
Variety

“Fascinating in its balance between microcosm and aerial view, but the performances definitely raise more emotional heat.”
4/5 – Little White Lies

“it is well worth seeing, if you can bear its visceral mini-dramas and unnerving set-pieces.”
3.5/4 – RTÉ

“Donbass is a flawed, but vivid achievement.”
4/5 – Guardian

“A brilliant formalist, Loznitsa likes to turn his camera on crowds in motion, turning each sequence into a collective indictment.”
LA Times

“A scathing portrait of a society where human interaction has descended to a level of barbarity more in keeping with late antiquity than the so-called contemporary civilized world.”
Variety