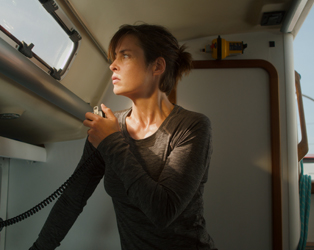 On leave from her exhausting work as a paramedic in Cologne, Rieke (Susanne Wolff), a skilled amateur sailor, is navigating her yacht, the Asa Grey, from Gibraltar to Ascension Island, located between South America and Africa. Following a violent storm, she spies a distressed shipping vessel off the coast of Cape Verde overloaded with refugees. Disobeying the coastguard’s frustrating diktat not to engage, she rescues a lone boy from the water. As he recovers and attempts to signal to his family on the sinking boat, Rieke is faced with a dilemma that her well-intentioned interventions might cause more harm than good.

Wolfgang Fischer’s second film is a stark, lean morality play that examines the overwhelming immigration crisis in microcosm, challenging audiences to question their assumptions of how they might behave in such circumstances.