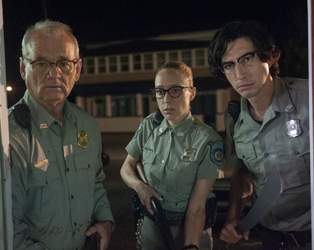 REVIEW ROUNDUP: THE DEAD DON’T DIE, THE BRINK, OUR TIME

Three new releases arrive at the Irish Film Institute on Friday the 12th of July 2019: The Dead Don’t Die, The Brink and Our Time.

THE DEAD DON’T DIE
“The Dead Don’t Die turns out to be very much a Jarmusch joint. It is – despite apocalyptic themes – the most light-hearted film of his career.”
4/5 – Irish Times

“Jarmusch loads his genre-tweaking experiment with so many of his A-list friends that it’s a gas just hanging out in their company.”
Entertainment Weekly

“It’s a minor, but most edible, bloody bonbon.”
Hollywood Reporter

“The Dead Don’t Die” is a bit too arch and remote to fully enjoy as a transportative or emotional piece of entertainment, but for Jarmusch fans and zombie fans, it’s a fun little exercise in witnessing the auteur graft his unique sensibility onto the beloved genre.”
LA Times

“This is a winningly eccentric film, as attuned in its own way to the rhythms of ordinary life as Jarmusch and Driver’s (even better) 2016 feature Paterson. But there is a pessimism gnawing away in its gut that can’t be laughed off”
4/5 – Telegraph

THE BRINK
“Utterly compelling and slightly maddening, whatever your political leaning might be.”
4/5 – Irish Independent

“The Brink, Alison Klayman’s insightful and often unnerving look at one of the most divisive figures in recent memory, isn’t a particularly fun or easy watch.”
3.5/5 – Rolling Stone

“The Brink is an impeccably crafted verité ramble — an engaging and enraging, disturbing and highly revealing movie.”
Variety

“The result is a watchable overview with few explosive details, but plenty of reasons to root for his downfall, and some modicum of payoff.”
IndieWire

OUR TIME
“One of the year’s most thought-provoking and spellbinding releases, Our Time is calibrated for patience and observation with ideas as concrete as such an ambiguous storyteller like Reygadas can offer.”
The Wrap

“The movie asks a lot of the viewer, but to this viewer, it gave back more.”
The New York Times

“Nuestro tiempo ultimately feels like an extended couples-therapy session that we were invited to by mistake, with Reygadas playing both doctor and patient in a conflict of interest that goes unresolved.”
IndieWire