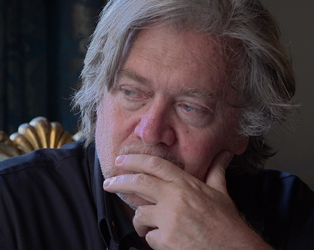 This film was released on Friday 12th July 2019 and is no longer screening.

When Steve Bannon left his position as White House Chief Strategist less than a week after the Charlottesville rally in August 2017, he was already a notorious figure in Trump’s inner circle for bringing a far-right ideology into the highest echelons of American politics. Unconstrained by an official post, he became free to peddle influence as a ‘kingmaker’, turning his controversial brand of nationalism into a global movement.

The Brink follows Bannon through the 2018 midterm elections in the US, while shedding light on his efforts to mobilise and unify far-right European parties in order to win seats in the May 2019 parliamentary elections.

Granted unprecedented access to her subject for more than a year, Alison Klayman adopts a vérité, observational approach, throwing back the curtain and capturing in intimate detail the world in which Bannon operates.