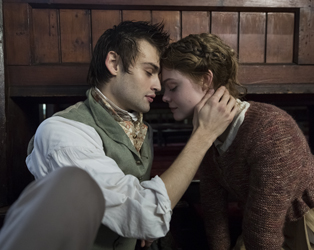 Two new releases and one returning classic grace our screens from Friday the 6th of July. Mary Shelley is a biopic starring Elle Fanning as the leading lights in gothic literature, and it was shot in Ireland! Whitney is a new documentary about the famed singer from director Kevin MacDonald and Michael Cimino’s masterpiece The Deer Hunter returns for its 40th anniversary in a new 4K restoration.

MARY SHELLEY
“The director and her star make their point under the meticulously appointed cover of the film’s 18th-century setting, but they make it plainly, cleanly, and with fire”
Boston Globe

“A reminder that England in the early 19th century remains a rich repository of stories and characters, and era that can be made to feel charmingly quaint and bracingly modern, on both the page and the screen”
New York Times

“A welcome showcase for the considerable talents of Elle Fanning, who deftly shades the trials and tribulations of the young writer and her complicated relationship with Percy Shelley”
Village Voice

“A passionate film about a woman’s ideas”
Hollywood Reporter

WHITNEY
“Whitney the performer, Whitney the person and Whitney the documentary are all captivating, and this opportunity to become engrossed in the mystery of her world should not be missed”
4/5 – RTE

“It’s a well-worn tale, but that doesn’t diminish the scale of its tragedy”
Village Voice

“You don’t have to be a fan of Whitney Houston’s music to love director Kevin Macdonald’s sharp-edged, revelatory and seriously emotional documentary about her life”
Time Out

THE DEER HUNTER
“An astonishing piece of work, an uneasy mixture of violent pulp and grandiosity, with an enraptured view of common life — poetry of the commonplace”
New Yorker

“Its feelings for time, place and blue-collar people are genuine, and its vision is that of an original, major new film maker”
New York Times

“This is Cimino’s masterpiece”
5/5 – Guardian