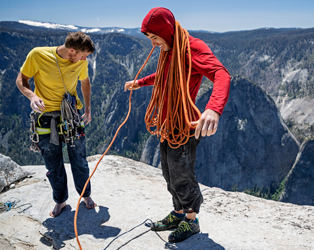 It’s a busy week with four new films releases on Friday the 14th of December, and we’ve got a bonus title below too!

Free Solo is a new National Geographic documentary following free climber Alex Honnold’s attempt to summit El Capitan. Always controversial director Lars von Trier serves up his latest with The House that Jack Built and new Irish documentary Keepers of the Flame focuses on the rarely told story of the men and women who fought for state pensions in the wake of the Irish Civil War. It’s a Wonderful Life also makes a return and we’re highlighting Dead Souls, a special documentary event which unfolds in two four hour screenings on December 15th and 16th.

Read on for reviews, or pop in to make up your own mind!

“Free Solo is about getting dangerously close to the edge, where some people feel most alive. We get to experience that thrill secondhand, and that’s enough.”
4/5 – Time Out

“As Alex Honnold climbs El Capitan solo and without a net, you feel every adrenaline-pumping moment.”
4/5 – Rolling Stone

“For those who love the thrill of high-adrenaline adventure docs, National Geographic’s “Free Solo” will be a hard experience to top.”
Variety

THE HOUSE THAT JACK BUILT
“Dillon might have trouble putting this one at the top of his resume if he wants to do a Disney film, but there’s no question he delivers an impactful movie monster, with darting eyes and a toothy smile that makes Jack at once seem empathetic and bonkers.”
indieWire

“It’s designed to get under your skin, and does.”
Variety

“A grotesque, lopsided edifice – take a few steps back and look up in sickened awe.”
5/5 – Little White Lies

“Von Trier’s relationship with his audience, like that with his actors, has become a nightmarish cycle of abuse, shame, forgiveness and admiration. I’m very glad I don’t live inside his head, but it’s a compelling place to visit every now and then.”
4/5 – Times

KEEPERS OF THE FLAME
“Most importantly, the reasonable, humane arguments are structured with the clarity you would expect from a professional historian. It is, in the age of online fury, refreshing to hear contentious issues pondered in such measures tones. An education.”
Irish Times

IT’S A WONDERFUL LIFE
“What is remarkable about It’s a Wonderful Life is how well it holds up over the years; it’s one of those ageless movies, like Casablanca or The Third Man, that improves with age.”
4/4 – Roger Ebert

“Funny, compelling and moving.”
Time Out

“It’s a Wonderful Life is a wonderful title for a motion picture about which practically everyone who sees it will agree that it’s wonderful entertainment.”
Hollywood Reporter

“Wang’s film is a vital excavation of history in danger of being eroded away.”
4/5 – Guardian

“An essential document of survivor testimony that stands as China’s answer to Shoah.”
5/5 – Little White Lies

“A powerfully sobering and clear-eyed investigation that justifies its length through the gravity and presence of its testimony.”
Variety

“This essential documentary is necessarily, unflinchingly grim; the cinematic equivalent of walking in the survivors’ shoes, and a complex, challenging but crucial viewing experience that burrows its immense sorrows deep into the audience’s bones.”
Screen International