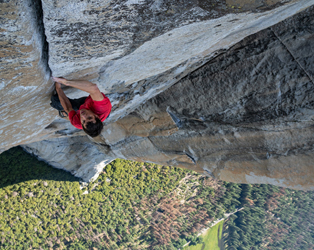 This film was released on 14th of December 2018, and is no longer screening.

Professional climber Alex Honnold scales the world’s most vertiginous cliff faces without ropes, harness or any other safety equipment, using only his bare hands and a bag of chalk. Known as ‘free soloing’, the extreme sport, which has cost the lives of many, has propelled Alex to the status of a celebrity amongst the climbing community. This stunningly shot, vertigo-inducing documentary from renowned filmmaker Chai Vasarhelyi and photographer and mountaineer Jimmy Chin observes the idiosyncratic Honnold as he prepares to realise his seemingly-impossible lifelong dream of climbing the 3,200 sheer feet of rock that is El Capitan in Yosemite National Park.