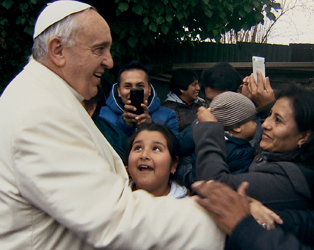 August’s pairing of a new release and a specially devised main course menu will be Wim Wenders’s new documentary Pope Francis: A Man of His Word (opening August 10th).

In advance of this month’s papal visit to Ireland, Wim Wenders’s new documentary on the current Bishop of Rome receives a cinema release. Consisting mostly of interviews in which the Pope holds forth honestly and without hesitation on a range of topics, including the wealth of the Church, the film is at its best when at its simplest, with the former Jorge Bergoglio coming across as a man of supreme decency and compassion who truly believes in practising what he preaches.

The menu for this month will include a choice of: Choripán, chorizo sausage in bread with chimichurri; Fish Empanadas, delicious baked dough pockets filled with seafood; and a Forest Mushrooms Risotto.