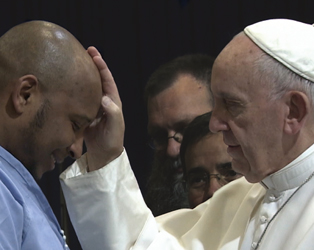 This film was released 10th August 2018, and is no longer screening.

In advance of this month’s papal visit to Ireland, Wim Wenders’s new documentary on the current Bishop of Rome receives a cinema release. Like Werner Herzog, Wenders has had more recent success with his documentaries than his features. Consisting mostly of interviews in which the Pope holds forth honestly and without hesitation on a range of topics, including the wealth of the Church and its recent history of sexual abuse, the film is at its best when at its simplest, with the former Jorge Bergoglio coming across as a man of supreme decency and compassion who truly believes in practising what he preaches.