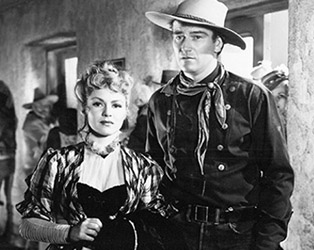 Throughout his career, Welles remained unstinting in his praise of John Ford. He claimed that he watched Stagecoach some 40 times in advance of filming Citizen Kane, saying, “As it turned out, the first day I ever walked onto a set was my first day as a director. I’d learned whatever I knew in the projection room – from Ford”.

In this Western, John Wayne, in his breakthrough role, joins a group of travellers who come under threat from Apaches on the warpath. A film that proved hugely influential on any number of directors, it was for Welles the textbook for filmmaking.

Efforts to trace the copyright holder of this film proved unsuccessful. Anyone with pertinent information is invited to contact the IFI.