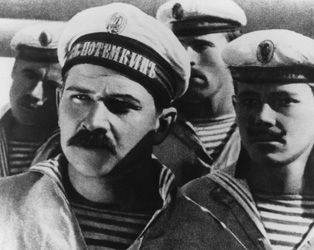 There are a number of parallels between these two of cinema’s most influential filmmakers. Like Welles, Eisenstein began his career in theatre, and on moving into film made an immediate and definitive mark on the future of the medium with his first two features, both released in 1925, Strike and Battleship Potemkin.

Commissioned as part of the twentieth anniversary celebrations of the first Russian revolution, Potemkin is a dramatisation of the events surrounding a famous mutiny. Although intended as a propaganda film, Eisenstein used it to test his theories of montage, believing that careful editing would elicit the desired emotional responses from audiences.