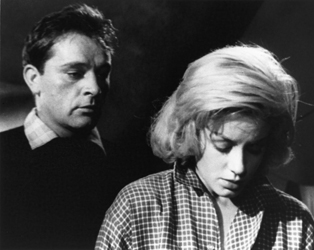 Jimmy Porter (Richard Burton), a disillusioned university graduate, rejects his wife’s middle-class aspirations and instead chooses to earn a living as a jazz musician and a trader at the local market. Their already troubled marriage reaches a crisis point when another woman becomes the object of his aggression and attention.

Adapted from John Osborne’s play, Tony Richardson’s Look Back in Anger is a landmark entry into what became known as the British New Wave of cinema that emerged in the late 1950s and early 1960s. Often referred to as ‘kitchen sink dramas’, these films represented working class life in a refreshingly forthright and realistic manner.