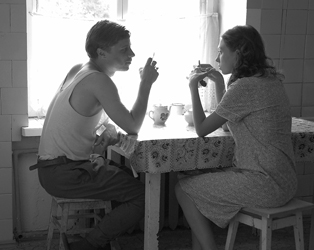 To coincide with Lithuania’s Presidency of the  Council of the European Union this year, the IFI is pleased to collaborate with the Lithuanian Embassy in Ireland to present this programme reflecting the diversity and strength both in terms of style and content of the country’s film industry. The line-up consists of films all made in the last five years and the filmmakers come from three different generations. The features cover a wide range of themes and concerns including history (Vortex), identity (Vanishing Waves) and crime (Eastern Drift). Yet their titles are indicative of a common thread around a distinctive relationship with the natural world, and at the core of each of these films is a strong central character who provokes and enthrals the audience in equal measure. Opening the programme on December 6th is Vanishing Waves, the winner of best film at JDIFF this year and we are delighted that director Kristina Buožytė will attend the screening and take part in a Q&A afterwards. We look forward to an exciting weekend of Lithuanian cinema.

Supported by the Embassy of the Republic of Lithuania to Ireland.

The IFI would like to acknowledge the support of Arturas Jevdokimovas for his collaboration in assembling this programme.