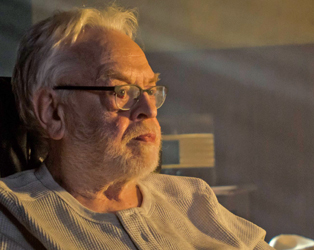 This screening was followed by Q&A with Tony MacMahon and Cathal Ó Cuaig, hosted by Tristan Rosenstock.

A lyrical portrait of a brilliant yet tormented artist, Slán leis an gCeol explores the complexities of a talented and philosophical man. Tony MacMahon, one of Ireland’s most remarkable traditional musicians, was recently diagnosed with Parkinson’s and is rapidly losing his ability to play.

His former skill is revealed through lively archival sequences which demonstrate his immense talent and the great pleasure he derived from performance. Now the loss of his creative voice is slowly killing his spirit and has led him to prepare for his own death through assisted suicide. Cathal Ó Cuaig’s  at times harrowing film follows MacMahon to India where has spent recent winters working on his memoirs. Delving deeply into MacMahon’s mental anguish, the film reveals a difficult story of euphoric highs and devastating lows through a long battle with bipolar disorder wherein he tried to use his passion and creativity to turn his darkness into light.