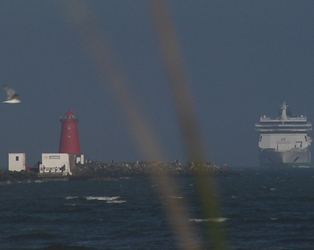 In this lyrical portrait ofworking life filmed on Dublin’s docks, a pride emerges within the stories and memories of the custodians of the port. As the film moves through discrete yet interconnected hubs of activity, filmmaker Moira Sweeney narrates her reflections on the evolving picture of a vibrant, transforming port life.

Recurring themes include a nostalgia for lost communal tradition and solidarity, the precarity of seafarers’ lives and the complexity of a global digitalised structure which controls ship movement into and out of ports.

A discounted ticket to attend both screenings is available for members (€14) and non-members (€15.50) in person or over the phone from the IFI Box Office – 01-6793477. Click here to read about the other screening: Time and Tide: Tribute to Peter Hutton on September 23rd at 12.30.