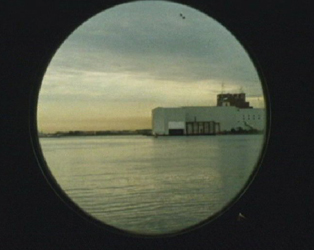 A second aemi event takes place at 15.00 on Saturday the 23rd of September – click here for more.

A major figure of American experimental cinema who died in June of last year, Peter Hutton was greatly influenced by his time working in the merchant marine.

This tribute screening begins with Lodz Symphony in which Hutton creates a melancholy world that evokes a 19th century industrial atmosphere populated with the ghosts of Poland’s past. This is followed by Time and Tide, a complex study of the relationship between man and sea, nature and industry, combining archive material with footage shot by Hutton aboard various vessels moving slowly through rivers and ports.

The programme concludes with a portrait of New York in the 1970s, shot in the high contrast monochrome that defined his early career.