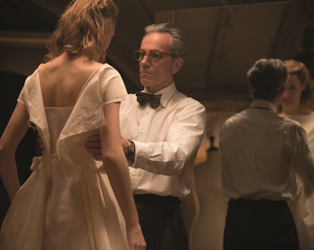 All screenings take place in 35mm unless otherwise indicated. Join us for an open discussion after the 18.00 screening on Monday 12th and our special Feast Your Eyes screening on Feb 13th.

In previous films such as Magnolia (1999) and The Master (2012), Paul Thomas Anderson has frequently addressed the issue of toxic masculinity.

In the beautifully constructed and impeccably performed Phantom Thread, this is again brought to the fore in a study of the shifting power dynamics at play between a trio consisting of couturier Reynolds Woodcock (Daniel Day-Lewis in his self-professed final acting role), his sister Cyril (Lesley Manville), her brother’s keeper, and his new model, muse, and lover, former waitress Alma (Vicky Krieps).