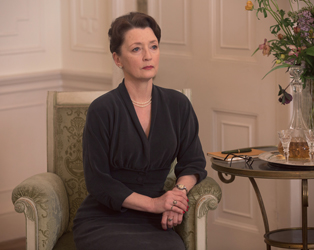 This month, Paul Thomas Anderson’s Phantom Thread is our Feast Your Eyes selection, where you can enjoy the film and a specially devised main course following the 18.20 screening on Tuesday 13th – tickets €20. Also on general release now, tickets here.

The menu will include:
Hake with curried cauliflower and mango
Chicken supreme with butternut squash and asparagus, with jus
Mushrooms and spinach omelette with sweet potatoes wedges

In previous films such as Magnolia (1999) and The Master (2012), Paul Thomas Anderson has frequently addressed the issue of toxic masculinity. In the beautifully constructed and impeccably performed Phantom Thread, this is again brought to the fore in a study of the shifting power dynamics at play between a trio consisting of couturier Reynolds Woodcock (Daniel Day-Lewis in his self-professed final acting role), his sister Cyril (Lesley Manville), her brother’s keeper, and his new model, muse, and lover, former waitress Alma (Vicky Krieps). Relationships take dark and unexpected turns in this lush, sensuous film.