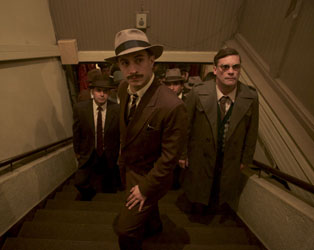 On Wednesday April 19th you can watch Neruda and also get a meal at the Café Bar with a special menu that’s paired with the film. Tickets cost €20 and are available here.

Pablo Larraín’s new film quickly follows has last biopic, Jackie, into cinemas, and sees him expand on its unconventional take on the genre in a film that is by turns sly, witty, subversive, metatextual, and above all, playful in its approach.

Neruda takes as its central character the Chilean poet-diplomat, portrayed by Luis Gnecco as a vibrant, committed idealist filled with ideas, who is also a snobbish elitist who believes the respect and adoration accorded to him is simply his due.

Following his criticism of the government, Neruda is forced into hiding, a concept he refuses to accept as he continues visiting his favourite brothels and making public appearances, risking capture by the man sent to chase him, “half-moron, half-idiot” police inspector Óscar Peluchonneau (Gael García Bernal). Fascinating in its complexity, Larraín’s invention makes for deeply rewarding viewing.