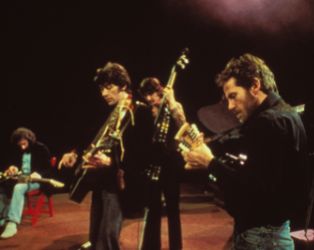 The first of a number of music-based documentaries directed by Martin Scorsese, The Last Waltz screens here in a new 4K digital restoration. When The Band, at lead songwriter Robbie Robertson’s urging, decided to retire from live performance, their farewell show became an extravaganza, featuring guest turns from the likes of Joni Mitchell, Neil Young, and a high-kicking Van Morrison. Interspersed among the performances is footage of interviews with the members of The Band reminiscing on their history. Considered practically since release to be one of, if not the best concert film ever made, The Last Waltz is an electrifying big-screen experience.